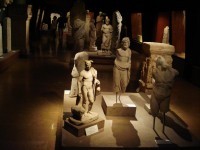 The Istanbul Archaeological Museums, a museum affiliated to the Ministry of Culture and Tourism, is located in Istanbul's Sultanahmet neighborhood, on the Osman Hamdi Bey slope connecting the Gülhane Park with the Topkapı Palace. Its name is plural, since there are three different museums under the same administration: The Archaeological museum, the Ancient Orient museum (Eski Şark Eserleri Müzesi) and Tiled Kiosk Museum (Çinili Köşk Müzesi).
Website: www.istanbularkeoloji.gov.tr
Distance from The Sultans Royal Hotel Istanbul: 5 minutes by walking
The Museum is open in between: 09:00 to 18:00 every day except Mondays Entrance Fee: 15 TL

Beylerleyi Palace was commissioned by Sultan Abdülaziz (1830–1876) and built between 1861 and 1865 as a summer residence and a place to entertain visiting heads of state. The palace is designed and constructed by Sarkis Amira Balyan. Empress Eugénie of France visited Beylerbeyi on her way to the opening of the Suez Canal in 1869 and had her face slapped by the sultan's mother for daring to enter the palace on the arm of Abdülaziz. (Despite her initial reception, Empress Eugénie of France was so delighted by the elegance of the palace that she had a copy of the window in the guest room made for her bedroom in Tuileries Palace, in Paris.) Other regal visitors to the palace included the Duke and Duchess of Windsor. The palace was the last place of captivity of the deposed sultan Abdulhamid II from 1912 until his death there in 1918.
rnWebsite: www.beylerbeyi.gov.tr
rnDistance from The Sultans Royal Hotel Istanbul: 15 km
rnThe Museum is open in between: 9.00-15.00 every day except Mondays and Thursdays
rn

Blue Mosque ( Sultanahmet Camii ) The Blue Mosque, built in the early 17th century, remains an active house of worship today. This means visitors need to time their visits carefully, as the mosque is closed to sightseers during the five daily prayer times for Muslims. All visitors must remove their shoes and women must cover their hair. This is a small price to pay for seeing its priceless treasures that include 20,000 ceramic tiles in various tulip designs and 200 stained glass windows, all with intricate designs. The mosque, built by Sultan Ahmet, takes its name from the blue tiles on the dome and the upper levels of the interior.
Distance from The Sultans Royal Hotel Istanbul: 3-5 minutes by walking
The Museum is open in between: 09:00 to 18:00 every day except Mondays
Entrance Fee: No entrance fee

The Chora Church is considered to be one of the most beautiful examples of a Byzantine church. The church is situated in the western, Edirnekapı district of Istanbul. In the 16th century, the church was converted into a mosque by the Ottoman rulers, and it became a secularised museum in 1948. The interior of the building is covered with fine mosaics and frescoes. Website: www.choramuseum.com
rnDistance from The Sultans Royal Hotel Istanbul: 6 km
rnThe Museum is open in between: 9.00-17.00 every day except Wednesdays
rn

Hagia Sophia The ancient Byzantine church, built by Justinian I between 532-537 AD after the Nika Riot, was later converted to a mosque with the addition of minarets in mid-15th century. The remarkable structure with its 56m high immense dome is a museum today in which you can see both Christian and Islamic art. There are good examples of the Byzantine mosaics as well. it was the largest cathedral in the world at one time.
Website: www.ayasofyamuzesi.gov.tr
Distance from The Sultans Royal Hotel Istanbul: 5-10 minutes by walking The Museum is open in between: April 15th - November 1st 09:00 to 18:00 every day except Mondays November 1st - April 15th 09:00 to 16:00 every day except Mondays Entrance Fee: 30 TL

The Suleymaniye Mosque, built on the order of Sultan Suleyman (Suleyman the Magnificent), "was fortunate to be able to draw on the talents of the architectural genius of Mimar Sinan" The construction work began in 1550 and the mosque was finished in 1558. The mosque is modeled in part on the style of a Byzantine basilica, particularly the Hagia Sophia, which was perhaps a conscious move on the part of the sultan to create a continuity and a symbolic connection with the city's past.
Distance from The Sultans Royal Hotel Istanbul: 4 km - 30 minutes by walking
The Mosque is open in between: 09.00 – 18.00 everyday ( except pray times )
Entrance Fee: No entrance fee

The Spice Bazaar is located next to the Flower Market on the banks of the Golden Horn called Makron and Envalos by the Byzantine and Eminönü by the Ottomans. The Spice Bazaar is one of the most characteristic places of Istanbul. Spice Bazaar which is one of the oldest covered bazaars of Istanbul is situated within the complex of Yeni Cami. The Yeni Cami complex which was commissioned by Safiye Sultan to be built and the construction of which started in the year 1591 was completed by Hatice Turhan Valide Sultan in the year 1633.In the Bazaar which is famous for its herbalists currently dried fruits, delicatessen and various food staff besides conventional products such as natural medicines, spices, flower seeds, scarce plant roots and peels are sold. It is known that the spices sold here are in addition to their consumption as food staff, useful for the treatment of certain diseases. Lately an increase in the number of jewelery shops in the bazaar is being observed. Within the Spice Bazaar there are restaurants with a view over the Golden Horn and Galata Bridge as well.
Distance from The Sultans Royal Hotel Istanbul: 30 minutes by walking The Spice Bazaar is open daily

Taksim Square (Taksim Meydanı) is considered as the heart of modern Istanbul and symbol of the secular Republic because of the Cumhuriyet Anıtı (Republic Monument) that stands in the middle of the plaza. As a main transportation hub and with numerous hotels, restaurants and pubs surrounding the area, it’s a popular destination for both tourists and locals alike.

This museum contains one of the most important collections of Turkish and Islamic art in the world. First established in 1914 at the Daruzziyafe of the Süleymaniye Complex, it was moved in 1938 to its present location on the site of the Byzantine Hippodrome, in the palace of İbrahim Paşa. This palace, built in 1524 by one of the most powerful Ottoman Grand Viziers, is the grandest Ottoman private residence. The collection spans the periods of the Ummayids, Abbasids, Mamluks, Seljuks, Beyliks and Ottomans, and contains rare objects and works, including stonework, ceramics, metalwork, silver, brass, and wood objects and ornaments, as well as manuscripts, calligraphy, carpets and kilims. Specific items on display here are funeral belts, bejeweled objects such as candlesticks decorated with valuable gems, pearl reading desks, carved cooper cups, royal crests, clothing belonging to Sultan Yıldırım Beyazıt and Sultan Selim II, carpets from the Caucasus, and intricately carved doors. In addition, there are exquisite manuscripts of the Quran, Ottoman miniatures, as well as various edicts of the Ottoman Sultans, not to mention keys to the Kaba.